Research has shown that a new laser that has been approved by FDA is able to stimulate the production of collagen and this helps to prevent painful intercourse.

Most people are afraid of laser when it comes to the vagina because of the torture that it can bring, but the Mona Lisa touch, the first intravaginal laser, has been shown to improve women’s lives.

This new type of laser is designed to treat atrophy of the vagina, a condition in which the walls of the vagina become dry and thin. This condition is precipitated when one reaches menopause and the women gets pain when having sexual intercourse and it may also interfere with the function of the urinary system.

The other causes of vaginal atrophy include ageing, traumatic birth, scarring, breast feeding, trauma, prolonged use of birth control pill, and severe damage of the vagina.

A study that was done by the menopause society of North America has showed that approximately 20-45% of the elderly and middle aged women have shown symptoms of vaginal atrophy. Research has also shown that despite the increase in number of the women who are suffering from vaginal atrophy, very few are offered help by the health care providers or seek help.

The Mona Lisa touch is designed to counteract the effects that are brought about by vaginal atrophy by inducing the production of collagen in the vagina. This helps to restore the mucosa of the vagina and rehydrate its walls.

As in the case with most laser treatments that are standard and are offered by the dermatologists, this form of laser does not require for one to be given anesthesia and the side effects are very few. The side effects include some swelling and redness and this can last for 1-2 days.

Reports from the Cincinnati Enquirer have shown that the Mona Lisa treatment is currently under clinical trials at the Christ Hospital that is located in Cincinnati, Ohio. The hospital is giving the treatment at the outpatient department for $1500, a set of 3 treatments.

The procedure takes less than 10 minutes to be performed and it alters the production of collagen and promotes the multiplication of cells. The laser treatment also restores the blood supply and the strength of the vaginal walls and this help to increases sexual sensation. 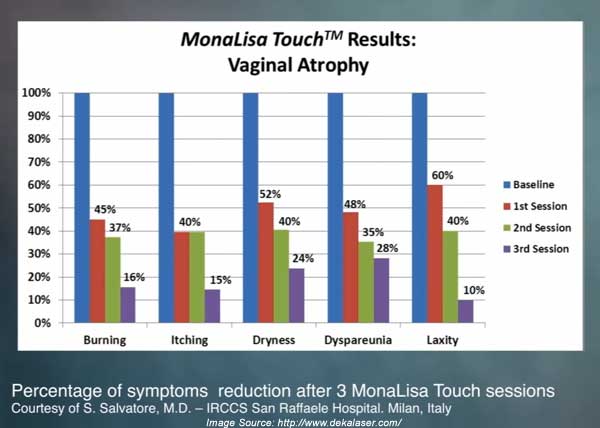 Prior to the treatment being commenced in us, it had gone clinical testing in Italy and it showed to have positive results. For most women who are currently suffering from vaginal atrophy, the introduction of the new laser treatment in US will mark the first time that this women can have safe treatment in the modern technology that is able to alleviate their suffering.

The past treatments that were used for vaginal atrophy were made up of hormone therapies that increased the level of estrogen while counteracting the effects of the symptoms. This is the mode of treatments that are used for the managements of symptoms that occur when one reaches menopause.

However, there are some women who have a contraindication to estrogen and they include those who are suffering breast cancer, history of stroke and other forms of heart conditions. Most of these treatments were depended on the patient being able to effectively adhere to the treatment protocols. The effects were also short term and the benefits were not felt after the patients discontinued their use. 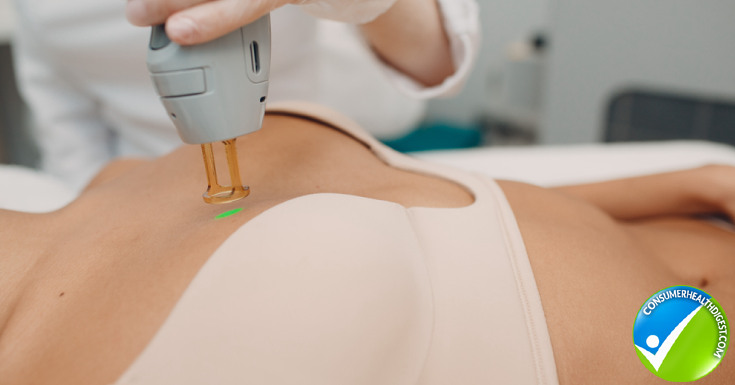 The laser treatment is directly targeted to the symptoms that occur when one is suffering from vaginal atrophy and it does not alter the level of hormone in the body. Therefore, the Mona Lisa touch is a good and viable treatment option for these women.

If the news is too good to be true, there is a potential problem that is facing this new technology. Most insurers have not announced whether or not they are going to include intravaginal laser treatments in their scheme including Mona Lisa touch.

Research shows that the women who have undergone this treatment at the Christ Hospital have paid the bill from their own pocket. The fact that approximately 75% of women who suffer from vaginal atrophy have problems when having sexual intercourse, it is unfair that the insurers deny them coverage for this treatment.

The same insurances pay for similar problems that help with the sexual problems in men. Dr. Karram Mickey who is a director of urogynecology at the Christ hospital said that when he heard about the insurances, he asked about the Viagra and penile implants that were being covered by the same schemes’.

The effects of Mona Lisa treatment are long lasting because the treatment creates structural changes in the vagina and the results will be felt independent of the patient’s actions.

The Mona Lisa treatment is also good for patients who have suffered from breast cancer, a family history of the breast cancer or are contraindicated to use hormonal replacement therapy.

You may also give a chance to female libido enhancement such as Provestra which helps you to lubricate vagina & may give comfortable sexual intercourse on your budget.