Female sexual enhancers have become very popular today. The reason for this is because many women suffer from sexual dysfunctions which can be due to a number of causes.

For instance, most formulas improve overall sensation and pleasure during sexual activity. Most products are also designed to increase sex drive and improve vaginal lubrication.

Remember that you should be very careful when you’re in the market for such products since only a small percentage of the formulas being sold are highly effective and some may even cause side effects.

To help you choose among the hundreds of female enhancers available, we will be reviewing a known brand being sold online. 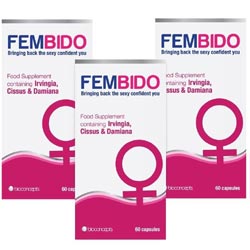 Fembido Sexual Enhancer is a natural supplement that increases energy and sex drive.

It is stated on the product’s website that it was formulated by a team of health professionals to safely and naturally increase sexual excitement of users.

It is only made from natural ingredients to prevent serious side effects. The female sexual enhancer is popular in the United Kingdom but it is not well known in the United States.

Fembido is formulated with a blend of herbal ingredients that work together to naturally restore female desire. It also helps increase sex drive and energy levels while increasing sexual desire.

It also has the added benefit of improving sensitivity to enhance pleasure during sexual activity by improving blood flow to sensitive areas.

This also helps the user achieve more powerful and more frequent orgasms. A 60 tablet bottle is being sold online for €24.95 and it is not available in retail stores in the United States.

How Long Does Fembido Take to Work?

Fembido Sexual Enhancer is recommended to be taken as needed but it can also be taken daily as a supplement.

It claims to offer instant results once intake begins but most customer feedback and reviews say it takes a couple of days before noticeable results are experienced by users.

There is also some feedback from people who have tried it saying that it doesn’t have any effect even after finishing a whole bottle.

Irvingia is extracted from mango bush fruits in West Africa where the tea-based infusion has been used for centuries as a natural aphrodisiac.

Recent research has shown that it also helps prevent obesity but studies are still being conducted to substantiate such a claim. Cissus is derived from a nutritious plant native of Cameroon.

It has been used by natives for centuries in treating a variety of ailments including low energy level and reproductive disorders.

A recent study has shown that it helps control blood glucose levels in diabetics by reducing the amount of a particular enzyme.

L-histidine is also included in the formulation of Fembido Sexual Enhancer. It is implicated in the function of the hypothalamus and thalamus which are important glands in the production of hormones.

Low sex drive is primarily connected to low levels of certain hormones in women including estrogen and testosterone. Deficiency of L-histidine has been shown to negatively affect a woman’s ability to climax.

The female enhancer also contains Damiana leaf which helps improve circulation and enhance sensitivity in the genitals. It is also a natural sex drive booster.

Even natural ingredients can cause side effects like damiana which has been linked to upset stomach, dizziness, and convulsions but only when very high doses are taken.

As long as the recommended intake is followed, side effects will unlikely occur unless the individual is hypersensitive to any of the product’s ingredients.

Fembido Sexual Enhancer should be taken about 30 minutes before intended sexual activity.

Take one tablet but two tablets can be taken if you feel that the effect of one is too weak. Swallow the tablet whole with a glass of water. It can be taken daily or as needed.

Follow the instructions carefully and consult your doctor prior to use if you are pregnant, nursing, have any medical condition or are under medication.

Check the ingredients carefully and make sure you’re not hypersensitive (allergic) to any of them. Do not use with other female sexual enhancers to prevent serious side effects.

After extensively inspecting Fembido Sexual Enhancer including its ingredients and what customer feedback and reviews are saying, it is a good female sexual enhancer.

The formulation is good and the active ingredients are backed by scientific data. However, it also has certain weaknesses like the fact that it is not available in retail stores in the United States.

Also, most feedback and reviews from people who have tried it say the effects are not very significant.