Addyi is a non-hormonal prescription pill which is used to treat hypoactive sexual desire disorder also known as HSDD in women who are almost facing menopause. It has been labeled the female Viagra.

This condition can come about in women because of health problems or because of certain medication which is also known to reduce sexual desire.

Addyi is only available through certified pharmacies and only in licensed healthcare facilities because it is known to cause severe side effects in cases of drug interactions.

Addyi is available in the form of 100mg tablets. It is also available in its generic form in the brand name Flibanserin.

Who is the Manufacturer of Addyi?

Addyi is manufactured by accompany called Sprout Pharmaceuticals. The company is based in the USA. The facility is FDA approved.

It was given the license to carry out studies to come up with Flibanserin which is classified as a multifunctional serotonin agonist antagonist also known as MSAA.

Addyi is also FDA approved. The drug is safe for human consumption although it is designed for women who are premenopausal.

It comes with some side effects to the users which are clearly stated on the label.

How Does Addyi Work?

Addy works by regulating some of the brain chemicals that affect sexual desire. The active ingredient flibanserin is a postsynaptic receptor agonist and antagonist which act on the central nervous system.

It corrects the imbalance of norepinephrine and dopamine which are known to be hormones that are responsible for sexual excitement.

At this stage, it is an agonist to stimulate more secretion. It also inhibits the secretion of serotonin which is a hormone that causes sexual inhibition.

The drug is not a hormonal drug and does not work like other drugs which are designed to treat sexual disorders in men.

Addyi Ingredients – Are they Safe & Effective?

What are the Advantages of Addyi?

What are the Disadvantages of Addyi?

The drug should be taken orally once daily before going to bed. The medicine should be abandoned if after 8 weeks the patient does not register any improvement in their sexual desire.

It has been shown that Addyi is known to interact with alcohol. People with liver disease and taking liver medication are also urged to stay away from using the drug.

The drug also interacts with certain heart medications which are designed to lower blood pressure.

The ending result would be relatively low and dangerous blood pressure. People who take CYP3A4 inhibitors should also stay away from the drug.

Women, including those who are almost hitting menopause, might have sexual disorders. This may cause decreased libido and low sex drive.

Addyi is claimed to possess the capability of solving these sexual problems through regulating brain chemicals that are responsible for sexual desire.

This drug, however, comes with several side effects including insomnia, nausea, fatigue, sleepiness, and dry mouth.

The drug is also only recommended to premenopausal women. Because this drug interacts with other drugs and alcohol, it would be better to consult your doctor before using it. 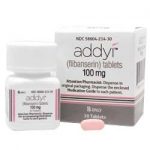