It is a foaming cleanser that gently and deeply deploys the exfoliating power of Glycolic acid to get rid of all impurities and built-up residues.

As a result, you end up with a fresher, brighter and radiant skin. It is formulated for dry skin and leaves behind a refreshing feeling owing to its herbal composition. 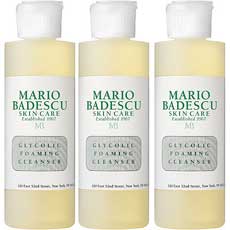 The active ingredients of this Glycolic acid-based cleanser are given below:

Sodium Lauryl Sulphate: This is an organic compound and it’s commonly deployed for cleanliness or other hygienic purposes. It also acts as an emulsifier and contributes to foaming and lathering.

Achillea: These are basically flowering plants that are found in Europe, some parts of Asia and North America. Its common name is Yarrow. The extract of this plant is commonly deployed in cosmetics, since it improves dry skin condition, by reducing its flakiness and by replenishing it.

Glycolic Acid: Glycolic acid is colorless, odorless and is highly soluble in water. It is rampantly deployed in many skin-care products, since it effectively removes dead cells, making you end up with smoother, fresher and softer skin. It also enables you to get rid of the discoloration of the skin, to result from aging, exposure to skin or because of acne.

Chamomilla Recutita: Chamomilla Recutita comes with Flavonoid and other Compounds comprising of Essential oils that prove to be very beneficial for sensitive skin.Moreover, it also claims to have anti-inflammatory properties and, therefore, can help soothe your skin.

With the help of the exfoliating powers of Glycolic acid, this cleanser breaks downs the layer of dead cells on your skin and in turn reveals a fresher and smoother skin.

Moreover, it also enables you to get rid of small skin discolorations. Herbal extracts present in this cleanser endow your skin with a refreshing and soothing feeling.

How to Use Mario Badescu Glycolic Foaming Cleanser?

Take a little amount of the cleanser and massage it gently into your skin. Make sure that it is done in circular motions and that you avoid the delicate area around your eyes.

Eventually, rinse your skin with warm water and pat it dry. You can consider following this step by dabbing your facial skin with a cotton ball soaked in toner or astringent.

It can be used twice or thrice a week if you happen to have oily skin. Otherwise, once or twice a week is also enough.

You May Also Like: Kate Somerville ExfoliKate Cleanser Reviews

Will it Show Results?

Furthermore, Glycolic acid can also go a long way in the removal of dead cells from the surface of your skin as well as treating all sorts of minor discolorations that might result from aging, sunlight or blemishes.

Thereby, a lot of consumers have also given a favorable review, claiming that the cleanser did wonders for them.

However, it is very much possible that you might come across occasional breakouts.

There are no apparent side effects if you have a normal skin type that isn’t super sensitive.

Those people whose skin is allergic to acidic products might face irritation or itchiness. Moreover, since it forms extensively, therefore it can tend to be towards the drying side.

It also bestows one with a radiant complexion since it has proved to be really effective in the treatment of the discoloration. However, it is possible that your already dry skin might get over dried by frequent usage of this cleanser.

To treat such a condition, it is vital that you make use of this cleanser only once or at the most twice a week.

Now that you know what a priority it should be to use a good facial cleanser, hopefully you'll make sure it's part of your regimen. A good face cleanser can keep your face clear of dirt and impurities, and over the long run it can give you younger looking skin.

Below are some of the best facial cleansers on the market today, in our opinion. 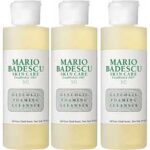