What is Prozac (Fluoxetine)?

Prozac is a popular trade name for an antidepressant drug generically called as fluoxetine. This antidepressant is under the drug class SSRI or Selective Serotonin Reuptake Inhibitors.

Prozac (fluoxetine) is a depression pill used to treat a wide range of psychological disorders but it is mainly used to treat major depression in adults and children. It is also indicated for OCD[1] (obsessive-compulsive disorder), panic disorder, bulimia nervosa and prementstrual dysphoric disorder.

The active ingredient in Prozac is fluoxetine hydrochloride[2]  which appears as a white to off-white crystalline solid that has a solubility of 14 mg per mL in water.

What are the Advantages of Prozac (Fluoxetine)?

What are the Disadvantages of Prozac (Fluoxetine)?

How Should You Take Prozac Fluoxetine?

As mentioned earlier, Prozac (fluoxetine) can be taken by patients suffering from the following psychiatric disorders:

On the other hand, not anyone who is suffering from depression or any other psychiatric disorder stated above could take the drug. A person may only take this drug if prescribed by a health professional duly qualified to give the prescription.

How Much is Fluoxetine?

Since Prozac is a drug that is as effective as the old medications used to combat depression but it causes fewer side effects, it is of no surprise if it comes with a hefty price. Of course, the generic drug fluoxetine is not expensive but Prozac itself is.

Its price ranges from about 25 USD to up to 225 USD, depending on its dosage (milligram per tablet). For instance, one bottle of 40 mg Prozac containing 30 pills may cost about 63 USD.

Is Prozac (Fluoxetine) Worth Purchasing?

This is a smart but a little bit difficult question as even though Prozac is a good antidepressant, it is also quite expensive. The answer to this question is actually on a case to case basis. Although many have claimed that Prozac is effective for them, this is not always the case.

There are individuals who respond poorly to the medication and there are those who take it in very well. The proper response for this question then is – Prozac is worth purchasing if it is effective and causes only a few side effects to an individual.

Otherwise, it is much better to opt for other types or classes of antidepressants. On the other hand, the generic counterpart of Prozac, which is fluoxetine, is a cheaper alternative and reviews show that it also is as effective as the branded one.

Although the positive response to the drug varies from one individual to another, usually, physical and psychological improvements while taking Prozac begins after one week of treatment, starting with one’s mood and energy increasing to a desirable level.

Consequently, like other natural antidepressant supplement, it would take about three to six weeks of continuous treatment before the full therapeutic effects of Prozac may be perceived.

Is Prozac (Fluoxetine) Right for You?

Determining whether Prozac (fluoxetine) is suitable for an individual depends on a variety of factors, with the assessment and decision of the doctor/psychiatrist as the main one. Since one person’s body may respond differently to the drug as compared to that of others, it is best to weigh the pros and cons of using Prozac before taking it.

If you are unsure if Prozac is right for you, it is wise that you talk to your prescribing psychiatrist regarding any hesitations that you may have for the drug such as its price and side effects.

What are the Precautions When Using Prozac (Fluoxetine)?

As like other antidepressants, Prozac may increase suicidal thoughts and ideations of pediatric patients, teenagers, and even young adults. Thus it increases the risk of suicide. Talking to a health care professional regarding the proper management of the risks involved is necessary.

You Can Also Check – Optimood Reviews

Prozac (fluoxetine) is one of the most widely used ways of managing depression and other psychiatric disorders. It is commonly preferred by health professionals because of the fewer side effects that it causes as compared to other drug classes. However, Prozac is also expensive which can really affect the public’s preference towards it.

Considering the fact that before witnessing the full therapeutic capacity of this antidepressant supplement, it should be taken for a long period of time; a cheaper alternative may be more beneficial for most patients.

To learn more about antidepressants, below is a list we have created to help you make a sound decision when choosing which products to opt for: 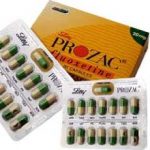