Brintellix (Vortioxetine) Review – What Is It and What is Brintellix Used For?

Brintellix is an antidepressant medication that works in the brain. It is approved for the treatment of major depressive disorder (MDD).

Brintellix is an antidepressant oral tablet made to counter major depressive disorders. It is made by Takeda Pharmaceuticals and contains ingredients that aid in combating insomnia, reduced concentration, fatigue, disinterest, lack of appetite among other conditions that are brought about by acute depression. It should be taken continually for the best results.

Who is the Manufacturer of Brintellix?

Brintellix Ingredients – Are they Safe & Effective?

The active ingredient in this antidepressant supplement is the Vortioxetine Hydrobromide. It appears as a white to slightly beige powder substance that is soluble in water. The inactive ingredients in Brintellix are:

The ingredients in Brintellix are;

What are the Advantages of Brintellix?

What are the Disadvantages of Brintellix?

Q: How Should You Take Brintellix?

A: Brintellix is only indicated for patients diagnosed as having MDD or Major Depressive Disorder. Thus, it is not recommended for patients suffering from other types of psychiatric disorders.

Q: Does Brintellix require a prescription, if not where to buy it?

A: Brintellix is a prescription medicine used to treat the symptoms of Major Depressive Disorder. Brintellix may be used alone or with other medications. Brintellix belongs to a class of drugs called Antidepressants, Other. Buy brand Trintellix (Vortioxetine) online from a Canadian Pharmacy. Canada Med Pharmacy is a leading Canadian online pharmacy referral service.

Q: Is Brintellix Right for You?

A: Brintellix might not be a very good first choice for an antidepressant. Even psychiatrists and health care professionals are thinking twice before prescribing this drug to their patients, not just because it is expensive but because more clinical findings that support its efficacy must be released.

Brintellix is a reasonably promising drug in treating major depression. It is different from the other types of drugs used to treat depression and it works using two mechanisms of action which are: a) receptor activity modulation and b) reuptake inhibition.

Thus, this drug is a much more improved version of the first-line agents used to treat the psychiatric disorder. However, it doesn’t necessarily follow that because this drug is relatively new, it is already effective. This product still has a lot to prove to the public in the next few years.

As of the moment, until further confirmation from public reviews about the effectiveness of this product has been published, it is wise to stick to popular antidepressants that professionals trust and recommend. 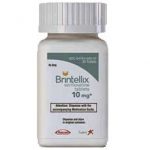