Nucific Probiotic Complex Reviews – How Does It Work?

Nucific Deep Cell Activator is a weight loss supplement that works by stimulating AMPK activity which is an enzyme that has the ability to burn off fat and convert it into energy.

Nucific Probiotic Complex is the best of probiotic supplements available in giving the body of the users the best results ever desired. It is capable of providing the best bacterial strains in the gut which attack destructive antibodies which may disrupt the normal digestive system of an individual when not taken care of effectively.

Most of the food materials which people consume contain a lot of bacteria and not all these bacteria are good in the health of the body. There are some bacteria which are leading to more harm than good in the digestive health of an individual. The supplement is sold in bottles which contain up to 30 capsules each.

Nucific is the company which is behind the formula Nucific Probiotic Complex in the market. The company is keen on ensuring that the best ever strains of bacteria are cultured in order to support better digestive health and gut in general. This is a company that is involved in the manufacture of several other health and wellness supplements such as Bio X4 and Nucific Deep Cell Activator.

There are several claims which the manufacturer has pegged on the supplement which is meant to indicate how impressive it is in boosting the health of the gut of the consumer.

The supplement is said to be 100% natural thus is not going to harm the users in any way when consumed into the gut. There is also a claim that Nucific Probiotic Complex is allergen-free hence the users will not react badly after consuming it.

The Advantages of Nucific Probiotic Complex

The Cons of Nucific Probiotic Complex

Is the supplement applicable to children?

The supplement is meant to be used by adults and in very rare cases does it apply to children below 18 years.

How much does Nucific Probiotic Complex Cost?

The bottle is priced at $45.00 which may help in balancing the bacteria levels in the body for effective and good colon cleanse and health of the gut. There are huge discounts on those who buy three bottles of the supplement and above at the same time. This is meant to give the users a better opportunity to maximize the health benefits of the supplement in the body.

Nucific Probiotic Complex is a great supplement which is aiding the body to support improved gut health by renewing the CFU of good bacterial strains. Bad bacteria are likely to make the digestion processes slow down or even stop thus making the food materials consumed not to be available to the body for better growth and development.

However, with better bacteria in the gut, the user will gain better digestion and maximally make use of the consumed food materials in the body. However, we suggest our readers explore colon cleansing products on the market which might offer more benefits than a probiotic supplement. 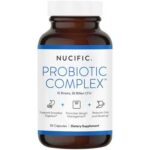