Revival Point Floraspring Review – Is This Probiotic Supplement Worth The Money?

Floraspring is a natural probiotic claim to shed an excessive amount of fat just after its first consumption. Read more about Floraspring in our review here!

Floraspring is described by its manufacturer as a probiotic formula whose composition controls metabolic processes and allows the body to function at its normal level.

This product is named Floraspring because it is said to clear up the bacteria in the users’ gut, and leaves users with a healthy gut, free of parasites and other negative effects on the body.

Floraspring’s producer claims that the product will help users cut down on cravings for unhealthy food; it will control appetite and digestion to allow its users to shed weight in a safe manner.

Who is the Manufacturer of Floraspring?

Floraspring is a product of Revival Point LLC., a New York-based maker of well-known health products.

Floraspring was developed by Dr. Steven Mosley as a product of tedious research when he discovered that the buildup of bad bacteria in the gut and other parts of the body is one of the most sickness-causing factors. He worked on Floraspring to help the body retain only good bacteria.

How Does Floraspring Work?

Floraspring decreases the digestion of carbohydrates as it reduces the activity of alpha-amylase. Floraspring also reduces plasma glucose levels for absorbed carbohydrates to support the user’s gut health.

Floraspring Ingredients – Are they Safe & Effective?

Floraspring Ingredients rely on the stomach’s HCL to eliminate toxins and parasites from the body. Some of its ingredients include:

Ginseng Root Extract – Ginseng is a popular herb with excellent detoxifying properties. Ginseng root extract is an important ingredient used in the production of Floraspring because as it can help flush out toxins from the users’ body and control their appetite[1]. 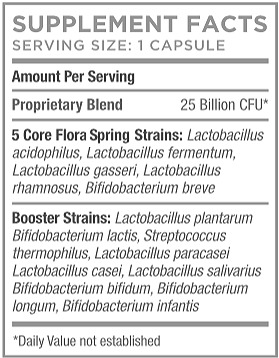 Pearl Powder – Pearl Powder promotes quick burnup of fat in the body. It is beneficial for preventing fat build-up and it improves weight loss results.

Rice Maltodextrin – This ingredient boosts the calories and energy levels of users of Floraspring without having effects on the carbohydrate intake of the user[3].

Which strains of probiotics are found in Floraspring?

Floraspring uses what Dr. Masley calls “super strains.” There are five, and he claims that they work together to produce maximum results.

The unique ability of these probiotic strains to aid in losing fat was discovered by accident in an experiment aimed to treat irritable bowel syndrome (IBS).

What are the Pros of Floraspring?

What are the Cons of Floraspring?

Q: How Should you take Floraspring?

A: Users are advised to take one tablet per day but some users may need to take as much as 2-4 per day for the best results.

Q: Where can I buy Floraspring supplement?

A: Floraspring can be purchased through their official website and is also available on Amazon.

Q: How Much Does Floraspring Cost?

A: Floraspring operates a 100% (90-day) money-back guarantee for all products purchased. Users may have to cover shipping and handling costs for products returned.

A: There is no information available about free trial offers for this product on the Official Website.

Q: What are the possible side effects of Floraspring pills?

A: According to the official website and online Floraspring reviews, there have been no recorded negative effects. It comprises natural ingredients that are both safe and inexpensive.

A: Floraspring effectively inhibits the actual formation of fat cells in the body by boosting the microbes in the gut while blocking carbohydrates.

Q: Is Floraspring approved by FDA?

A: None of the dietary supplements have been approved by the FDA. On the other hand, Floraspring is made in an FDA-approved facility that follows GMP (Good Manufacturing Practice) criteria.

Floraspring is intended to help users boost their body’s metabolism, and clear and maintain their gut health. This colon cleanser is especially beneficial because it introduces beneficial bacteria into the body to replace the bad bacteria and this leaves the user with no deficiency.

The product’s work on fat loss is a safe method of reducing overweight concerns in users. Floraspring is a probiotic supplement and its effects on the user’s overall health are impressive and will help users achieve the best results. 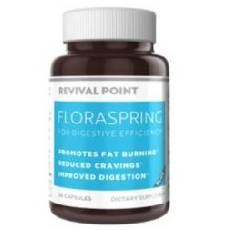 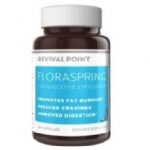