How Do Cannabinoid Receptors Work?

Learn the Science behind the Endocannabinoid System. Discover the potential roles of cannabinoid receptors in the modulation of signaling pathways.

Cannabinoids, or the major constituents of the marijuana plant, work with cannabinoid receptors in the body to produce its therapeutic effects.

How and why your brain makes its own cannabinoids. (Image via Shutterstock)
According to a study published in the International Journal of Molecular Sciences, the biological effects of cannabinoids come from the G-protein coupled receptor family, cannabinoid receptors 1 and 2; CB1R and CB2R.

The CB1R is the major subtype in the central nervous system that has drawn the most attention as a potential therapeutic option for many pathological conditions, including both neuropsychological disorders and neurodegenerative diseases.

The Endocannabinoid System – Lears the Science 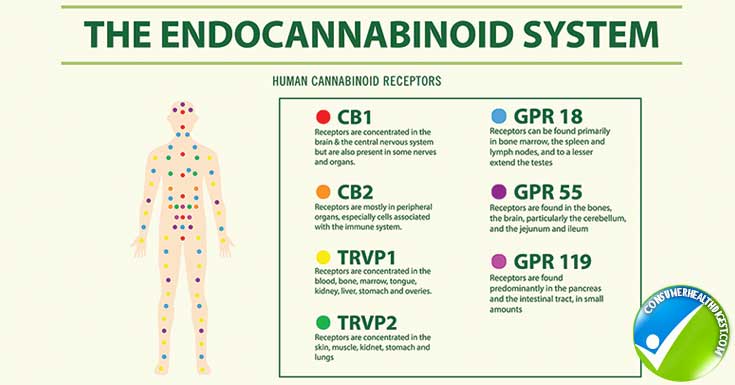 Phytocannabinoids or the ones found in plants like the marijuana plant are the ones that come from plants, but mimic endocannabinoids in the body.

According to a 2008 study published in the Journal of Neuroendocrinology, CB1 receptors are present in very high levels in several regions of the brand and found in a widespread fashion in lower concentrations.

According to Scholastic, endocannabinoid receptors are found in the following parts of the brain:

The endocannabinoid system plays a major role in the nervous system’s normal function, so interfering with it can have profound effects on the body.

That’s why THC, the most well-known cannabinoid in the cannabis plant, alters the body in so many ways creating the “high.” CBD oil, however, is different because the CBD cannabinoid produces all the therapeutic benefits of marijuana without the high.

Endocannabinoids – Naturally Produced by the Body

The anandamide molecule is one of two endocannabinoids the body makes. It operates throughout the ECS and is involved with appetite, pregnancy, memory, and several other functions.

If you’re familiar with “runner’s high”, then you know anandamide, because that’s where it comes from.

The other endocannabinoid, 2-ArachidonoylGlycerol (2-AG) doesn’t have a name that’s easy to say or remember, but studies show that is at least just as important as its sister molecule.

It, for instance, has been linked to protection from seizures, emotional state, and maintaining cardiovascular health.

The “afterglow” associated with a pleasurable sexual encounter? You can thank AG-2 for that.

YOU MAY ALSO LIKE – Top Rated Cognitive Enhancing Supplements

What the Cannabinoid Receptors Do

The receptors are responsible for mediating the effects of cannabinoids like CBD and THC. CB2 receptors have a more restricted distribution, being found in a number of immune cells and in some neurons.

Cannabinoids work differently from other neurotransmitters. Brain cells, or neurons, communicate with one another and the rest of the body by sending chemical messages.

The messages help coordinate and regulate everything we do, think, and feel.

Generally, these chemicals, or neurotransmitters, are released from a neuron known as a presynaptic cell, then travel across the synapse (a small gap) and then attach to specific receptors on another nearby neuron, known as the postsynaptic cell.

This causes the receiving neuron to go into action, triggering the set of events that allow the message to be passed along.

The ECS however, communicates messages differently. It works backward. When the postsynaptic neuron is activated, cannabinoids are made on-demand from the lipid precursors, or fat cells that are already present in the neuron.

Then, they are released from that cell and travel backward across the synapse to the presynaptic cell, where they attach to the cannabinoid receptors.

This is important because the cannabinoids act on the presynaptic cells, meaning they can control what happens next once those cells are activated.

Generally, cannabinoids function like a dimmer switch for the presynaptic neurons to limit the amount of the neurotransmitter, such as dopamine, that gets released. That in turn affects how messages are sent, received, and processed by the cell.

According to this CBD guide, depending on the type of cell the receptor is on the effects rapidly affect everything from sensation and mood to immunity and consciousness.

CB1 receptors are essential to healthy brain function, and one of the most common receptors throughout the entire nervous system. They are what cause you to get high when THC binds to them.

CB2 receptors, though not as plentiful throughout the body, are found mostly on the cells in our immune system. They help treat inflammation and play a role in how our body responds to various pathogens.

If you use cannabis products to fight conditions that are a result of an overactive immune system such as autoimmune disorders, digestive issues, arthritis, asthma, or allergies, you should celebrate your CB2 receptors.

While the majority of cannabinoids can bind to both CB1 and CBD2, including both the endocannabinoids and many of the phytocannabinoids like THC, CBD is different.

CBD doesn’t directly trigger either receptor, rather it modifies the receptors’ ability to bind to cannabinoids.

The best CBD oil plays a bigger role in the endocannabinoid system because it can influence other types of receptors and enhance your body’s natural level of endocannabinoids by occupying certain enzymes.

The body has a variety of molecules that are devoted to controlling when and where endocannabinoids are produced and how quickly they are broken down. They function to make sure the messenger is sent exactly when and only when it is desired.

These endocannabinoids are created from fat, and a number of enzymes are involved in their creation. Because cannabinoids are fat-soluble and the human body is made mostly of water, they need special transport proteins to help them make it through your body.

Each endocannabinoid has enzymes in the ECS that break them down, to stop their messages when needed so they do not continue to stimulate the ECS all the time.

Though we’ve only known about the ECS for about 30 years, the thousands of research papers and studies indicate that it is incredibly easy to throw the system out of balance.

Your diet, exercise, and stress levels all affect the ECS, and today’s lifestyle dramatically affects the natural system. Using a high-quality CBD oil can help you experiment and ultimately rebalance your ECS.