How Effective are Sirtuins to Protect Neurodegenerative Disease?

Sirtuins, types of proteins encoded by a gene of the same name, have been the focus of research for quite some time now. They function mainly as cell regulators in the mammalian body, and their role in aging and neurodegeneration is still a matter of debate. What we do know is that sirtuins, particularly SIRT 1, is that they inhibit NF-kB-regulated gene expression which is a protein complex strongly linked to aging, degenerative disorders, and even cancer.

Keep on reading and discover the different ways in which sirtuins ensure protection against neurodegenerative disease. And, remember, degenerative brain disease is more common than you might think, affecting the overall quality of life. You need to recognize the early signs of a neurodegenerative disorder and seek out solutions to protect yourself against its further evolution.

Sirtuins and Protection Against Neurodegenerative Disease

Changes in lifestyle, nutrition, and the environment are believed to be at the root of the recent rise in neurodegenerative disorders. The most common types of neurodegenerative disorders are Alzheimer’s disease, Parkinson’s disease, and Huntington’s disease. All disorders are characterized by abnormal accumulation of protein tangles that form aggregates in the brain and other nervous tissue.

The reason why this happens is not known, but evidence shows that aging and cell death has a lot to do with it. Sirtuins and sirtuin 1 (SIRT 1), in particular, were found in several studies to slow down the aging process while other studies found they protected against age-associated disorders. Furthermore, plant polyphenols, which are types of antioxidants, were also found to protect against both aging and neurodegenerative disorders. 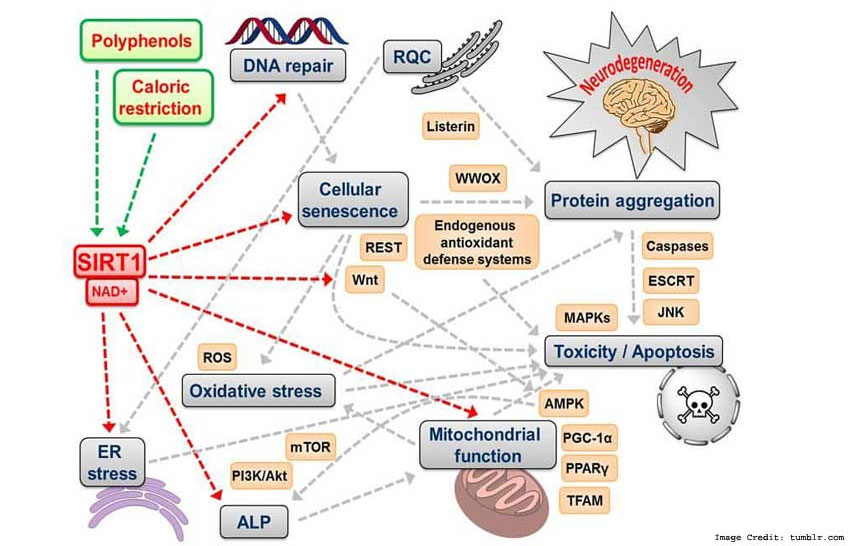 Polyphenols As Activators of Sirtuin

Because a growing body of research found that certain plant polyphenols act as activators of SIRT 1 whereas others inhibit SIRT 1 expression, their therapeutic role in preventing diseases of the brain is a popular topic of research. In the review mentioned at the beginning of this article, researchers explain that activation of SIRT 1 through polyphenols like quercetin, acacetin, and apigenin reduces inflammation in the brain by repressing NF-kB. While we already knew that polyphenols exhibited powerful antioxidant activity that protected against aging and disease, their indirect role in age-related disease onset through SIRT 1 activation is a novel finding. What such findings mean is that we may soon be able to develop effective treatment options for Alzheimer’s and similar diseases with the help of plant polyphenols.

Other Activators of SIRT 1

Among the polyphenols most strongly linked to protection against age-related diseases and aging, in general, is resveratrol. Resveratrol is a plant antioxidant found abundantly in wine, grapes, and many berries. Several studies have found that resveratrol activities SIRT 1 and in this way, provides anti-aging benefits. Other than resveratrol and other polyphenols, research also shows that caloric restriction provides anti-aging benefits via similar pathways.

Caloric restriction and fasting were also found to promote the expression of SIRT 1. This might provide an explanation to a large body of research linking fasting and similar practices to longevity. Some studies even show that fasting increased the lifespan in mice by up to 65%.

It’s important to note that this anti-aging effect seems to be enhanced when calorie restriction is combined with a diet rich in polyphenols.

What All This Means?

As we can see, when SIRT 1 is over expressed, we are protected against premature aging and diseases. Conversely, when SIRT 1 is under-expressed, there’s an increased likelihood of suffering from age-related disease states and neurodegenerative disorders.

As explained in the review above, SIRT 1 deficiency is associated with aging, cancer, and type 2 diabetes. Furthermore, having low levels of SIRT 1 in the brain was found to cause depressive disorders.

On the other hand, depressive disorders respond well to increased antioxidant activity in the brain as well as other methods to improve brain plasticity. Depression also mimics dementia and Alzheimer’s disease, other neurodegenerative disorders symptom-wise, albeit to a lesser extent.

When all facts are put together, what we can conclude is that the ongoing research on sirtuins might lead to a breakthrough in the development of therapeutic options for neurodegenerative and related disorders.

See More: What are Neurological Disorders and How Can be it Treated?

Sirtuins are ambiguous chemicals that we are just beginning to understand. Their role in human health and aging has been the subject of research in the past years, and evidence shows that having higher levels of these proteins provides a host of health benefits from increased longevity to protection against neurodegenerative disorders.

Interestingly, SIRT 1 needs to be activated via certain pathways and researchers found that certain plant polyphenols seem to be key to SIRT 1 activation. It goes without saying that increasing one’s intake of plant sources of food will likely lead to greater SIRT 1 activation as these foods are rich in polyphenols and other antioxidants.

As you have seen, sirtuins might offer enhanced protection against the negative effects of the neurodegenerative disease. In a world where degenerative brain disease has become a common occurrence, it is great to know that there are certain ways to protect ourselves and reduce such risks. Neurodegenerative disorder manifestations can be successfully improved with the help of sirtuins and other antioxidants