Dietary supplements are incredibly popular nowadays primarily due to the fact they provide health support in a natural and safe manner. Individuals who adhere to holistic medicine and those who want to try alternative methods before taking prescription medication use these products on a daily basis. Besides vitamins, minerals, testosterone boosters, menopause products, there are also lithium supplements.

These items aren’t as frequently discussed as other products; which is why this post will provide useful insight into lithium supplements benefits.

What is the drug lithium used for? 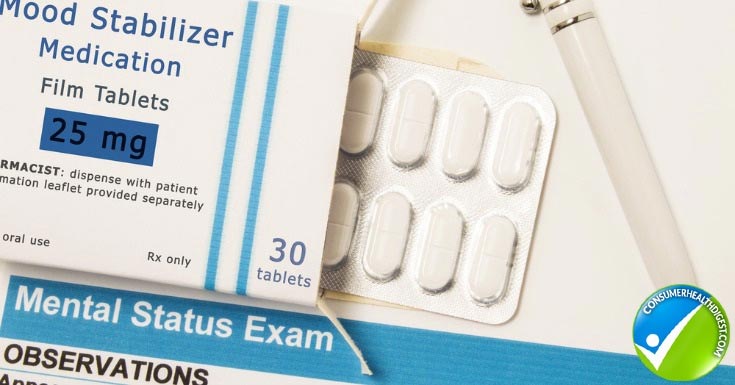 Before discussing lithium orotate supplement benefits, it is important to address different uses of drug lithium. Lithium is a trace mineral and belongs to the same class as electrolyte minerals such as potassium and sodium. Thanks to the incredible health potential, lithium is widely used in medicine for treatment of different conditions. The most common uses of lithium are:

What is lithium aspartate used for?

Unlike lithium carbonate which is only available with doctor’s prescription, lithium aspartate is an over-the-counter product. In fact, lithium aspartate and lithium orotate are the two most common supplements and they also happen to be within similar price range.

Lithium aspartate comes from aspartic acid while orotate is salt-derived. Both types of lithium supplements are used for almost identical purposes i.e. to manage and treat addictions, alcoholism, anxiety, depression, headaches, and to prevent brain aging.

How does the drug lithium work?

Even though the use of lithium in both over-the-counter and prescription form is common, it is not quite clear how it works. However, scientists are getting closer to uncovering the mechanisms of action behind lithium’s efficacy. A research team from MIT discovered that lithium probably works by inhibiting a protein in the brain.

Their findings, published in the Current Biology, revealed that lithium treatment silences activity in neurons that rely on protein BPNT1 and thereby normalize cell function in the brain. The discovery emphasizes the importance of further research on this topic in order to gain a clear understanding of how lithium works and helps us.

Now that you know a few basics about lithium as a medication and supplement, it’s time to address multiple effects they provide. Below, you can see the useful list of benefits of lithium carbonate as well as supplements lithium orotate and aspartate. 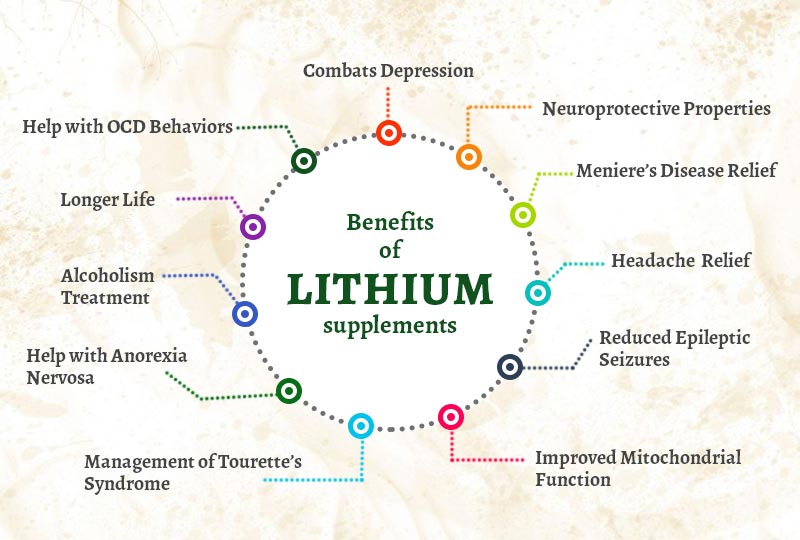 Evidence shows that lithium treatment works to reduce glutamate-induced excitotoxicity regulated by N-methyl-D-aspartate (NMDA) receptors which play a crucial role in the initiation of long-term memory. To clarify, excitotoxicity is defined as pathological process wherein neurons are damaged and killed by overactivation of receptors including NMDA.

This effect is largely a result of lithium’s potential to inhibit the calcium influx which is controlled by NMDA receptors. As a result, lithium proves to be beneficial for Alzheimer’s disease, mood disorders, and other uses you’ll see below.

Meniere’s disease is defined as a disorder of the inner ear. In this disorder, an affected person experiences episodes of vertigo, ringing in the ear (tinnitus), hearing loss, and ear pressure felt deep inside the ear. Although the disease can occur at just about any age, it usually starts between 20 and 50.

A study whose findings were published in the Acta Oto-Laryngologica discovered that 70% of patients reported decreased frequency and severity of episodes when they used lithium.

One of the most important lithium supplements benefits is their ability to decrease epileptic seizures, but this topic is still considered controversial. Studies reveal that epileptic patients show a significant reduction in severity and frequency of their seizures.
In addition, they also experienced improvements in their behavior when treated with lithium.

Alcoholism is a major problem nowadays when people turn to alcohol to deal with a hectic lifestyle, stressful situations, unresolved issues, and many other reasons. As mentioned above, lithium is widely used for the treatment of addictive behaviors and alcoholism is not an exception.

A research from the JAMA Psychiatry showed that important benefits of lithium carbonate extend to the promotion of abstinence from alcohol, diminished subjective symptoms of withdrawal, and delayed time to first drink.

Anorexia nervosa is a severe mental health condition and eating disorder wherein a person keeps the body weight as low as possible. At the same time, an affected patient fears gaining weight and t prevent it from happening he/she restricts the amount of food they eat. One of the less common benefits of lithium is its tremendous potential to help with anorexia nervosa.

A study that included two patients found that one gained 9kg and second gained 12kg during 6-week treatment with lithium.

All of us experience a headache from time to time, it’s nothing unusual. You can have a headache if you don’t get enough sleep or if you don’t drink enough water. Causes of headaches are numerous and their severity varies from one person to another. Lithium proves to be effective in the treatment of both an acute and chronic headache, which is particularly beneficial for people who deal with this pain frequently.

Obsessive-compulsive disorder or OCD is a quite common, long-lasting disorder where a person has uncontrollable and recurring thoughts or obsessions and behaviors. They feel the urge to repeat certain thoughts and actions over and over again.

Supplementation with lithium is strongly related to the reduced severity of OCD symptoms, according to a study from the American Journal of Psychiatry.

Tourette’s syndrome is a neurological disorder indicated by repetitive, stereotyped, involuntary movements and vocalizations referred to as tics. The Advances in Experimental Medicine and Biology published a small study which followed three patients and discovered that lithium had a far better effect than haloperidol, medication usually prescribed for Tourette’s.

Intake of lithium was closely associated with reduced number of tics and involuntary vocal sounds, without side effects.

This is probably the most shocking benefit of lithium you’ll come across – longer life. Nope, it’s not a marketing trick placed by a pharmaceutical company to sell supplements and medications, but a scientifically-proven study. A research that appeared in the European Journal of Nutrition found that long-term low-dose exposure to lithium exhibits anti-aging capabilities and decreases mortality.

Mitochondria are, basically, powerhouses of every cell and they are essential for proper functioning of tissues, organs, and systems in your body. Numerous studies have confirmed that lithium supplementation has the ability to improve mitochondrial function.

One study discovered that lithium exerts these effects by increasing the turnover of dysfunctional mitochondria.

And finally, we’re going to address the most widely known among many lithium orotate supplement benefits and positive effects of other types of lithium – depression management and relief. Lithium poses as one of the best-studied depression treatment methods.

Studies show that lithium increases the postsynaptic sensitivity of serotonin 5-HTIA, which contributes to anti-depressant effects.

Lithium is an important trace mineral which is widely consumed for medicinal purposes. Some types of lithium medications are available through prescription only while others come in supplement form. Lithium supplements benefits are numerous, but you should still consult your doctor before you go to the pharmacy and purchase them.