The natural aging process is impossible to avoid, but its effects go beyond fine lines and wrinkles on our skin. As we age, our body goes through a number of changes and our brain isn’t the exception. Our cognitive abilities tend to decline with age, which is why it is difficult to spot signs of major cognitive issues in elderly as they often interpreted as natural part of life. What are the signs of cognitive decline in older adults? Scroll down to find out how to spot these issues in your loved ones.

What Is Cognitive Impairment In The Elderly?

Cognitive impairment in the elderly has a number of causes ranging from medication side effects to depression and neurodegenerative disorders. There is no consensus regarding the age of onset of cognitive decline. While some studies show that we experience a decline in cognitive skills after the age of 60, there is also evidence showing that women can show signs of cognitive decline age 50.

Cognitive impairment in the elderly has a number of signs and symptoms. Learning to recognize them allows you to address these problems effectively and prevent or delay more severe problems. It is important for the elderly to consult a healthcare provider when they experience symptoms of cognitive decline and adhere to doctor’s instructions. Here are 10 symptoms to remember:

Attention is the ability to focus and concentrate on specific stimuli. Elderly with cognitive impairment and age-related dementia experience problems with selective and divided attention. Selective attention is the term that refers to one’s ability to filter out irrelevant information and focusing on info that matters. On the other hand, divided attention is your ability to focus on multiple things simultaneously. A sign of cognitive problems in elderly is the difficulty to retain attention both divided and selective i.e. a person’s mind wanders easily.

While we forget things from time to time in youth, memory problems are more frequent in the elderly. A growing body of evidence confirms that change in memory is one of the most common cognitive complaints among older adults. Age-related memory changes occur due to a number of reasons including slower processing speed, reduced use of strategies to improve memory and learning and decreased the ability to ignore irrelevant information. 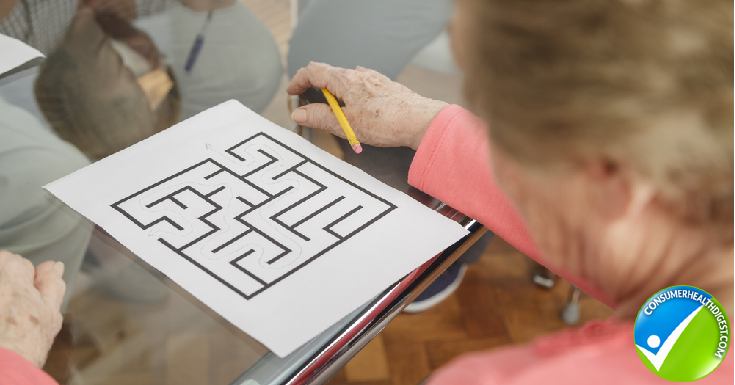 When it comes to language, in most cases it remains intact as we age. For example, your vocabulary remains the same or even improves over the years. However, one of the frequently overlooked cognitive issues in the elderly is decreased verbal fluency. Verbal fluency is a cognitive function that serves to facilitate information retrieval from memory and refers to the ability to perform a word search and generate words for a certain category. Problems with verbal fluency usually make it more difficult for a person to find the right words (e.g. animals, letters) in a short period of time while having a conversation.

Most of us misplace things from time to time, but we don’t do it on a daily basis. While losing the house or car keys and finding them in your bag or between sofa cushions is not a big deal, locating them in the freezer is a sign for concern. Elderly who experience cognitive issues often lose things and simple methods of retracting their steps to find lost stuff don’t work. It is not uncommon for these situations to get blown out of proportions. For instance, they may accuse someone of stealing their stuff when the reality is they misplaced them.

When discussing cognitive decline age 50 and beyond, we tend to think of memory lapses only but there is more to this problem than meets the eye. One of the most common symptoms of cognitive problems is losing train of thought, but most of us don’t pay enough attention to it. They think deeply about a subject and then simply don’t know what they were thinking about. An affected individual finds it difficult to participate in conversations because they can’t keep up with its flow, particularly if more people are involved. Watching a movie or reading a book can induce the same scenario which is why they go back and reread the chapter all over again.

Humans are social beings and withdrawal from friends and loved ones is always a symptom associated with some health problem. Besides depression, social withdrawal can also be a sign of cognitive issues in the elderly population. But, how? That’s because an affected person alienates from others due to insecurity regarding their memory problems, inability to keep up with conversation, and other problems.

8. Getting Easily Overwhelmed When Making Decisions

Decision-making is a cognitive process resulting in a selection of a course of action or belief among several alternatives. Sometimes making decisions can be so easy while in other instances it is a daunting task that leads to mental exhaustion. That being said, elderly with cognitive issues get easily overwhelmed when they are supposed to make just about any decision. They feel pressure even when planning steps to accomplish some task. In fact, agitation and unhappiness when an elderly person has to make a decision is an easy way to determine whether they have cognitive difficulties.

This doesn’t mean that every person who misses social engagements and appointments had cognitive issues. The difference here is that older adults with cognitive problems tend to forget important events such as birthdays, anniversaries, doctor’s appointments, or any other form of special occasion. Even when they write them down, if the note is in a visible place, that person still doesn’t remember the scheduled appointment.

Most people don’t like the change, but we get used to them and move on. Older adults with cognitive issues can’t cope with change that well and they find it extremely difficult to accept it. It is not uncommon for them to change their behavior and become easily agitated even due to seemingly unimportant changes.

A Brain Enhancing Supplement You Shouldn’t Miss Out: Lipogen PS Plus Review: How Safe And Effective Is This Product?

What Is A Severe Cognitive Impairment?

A person who experiences serious cognitive decline has these symptoms:

Causes of cognitive issues in elderly are numerous ranging from medication side effects to neurodegenerative diseases. While some causes can be corrected others can’t, but it is possible to slow down their progression. To avoid major problems, it is of huge importance to understand all the signs of cognitive issues and schedule an appointment to see the doctor.