Neural Fusion Reviews – Is It Really a Smart Pill?

Neural Fusion is a nootropic supplement that enhances memory, attention, focus, and motivation, as well as boosts cognitive growth and energy levels and protects the brain from free radicals.

What is Neural Fusion?

Neural Fusion is a Nootropic supplement, also known as a “smart pill.” Nootropics are compounds that have been found to improve one’s general cognitive capabilities, such as memory, focus, attention, and motivation.

Common symptoms of cognitive decline include short- or long-term memory loss, forgetting simple things throughout the day, having a difficult time concentrating, lacking the ability to focus or become motivated to do basic things, and having a lower energy level.

Nootropics, such as Neural Fusion, have been found to help with these issues by enhancing one’s mental strength[1].

Who is the Manufacturer of Neural Fusion?

The manufacturer of Neural Fusion is listed as Active at Any Age. It is unclear based on the official Web site where this manufacturer is located, but it does list a phone number, support e-mail, and customer support hours for any questions or concerns.

The manufacturer states that this brain supplement contains ingredients that are found to increase energy levels, improve memory, and enhance focus and motivation.

How Does Neural Fusion Work?

Similar to other Nootropics, Neural Fusion uses similar ingredients to provide alertness and improved cognitive health with continued use of the product. According to the manufacturer, the ingredients used in Neural Fusion have been shown to aid in both short- and long-term memory recall when taken daily.

These ingredients have also been found to clear one’s head for better mental absorption and help the brain function more rapidly. The company also states that Nootropics have been found to boost energy, cognitive growth, focus, and problem-solving capabilities.

The manufacturer does not list the specific ingredients of Neural Fusion on its Web site, but the following ingredients were listed as being in this product on a secondary site:

Ginkgo Biloba – An ingredient common in brain enhancing supplements because it may help with cognitive function[2].

Lion’s Mane Mushroom – Mushrooms that contain hericenones and erinacines, which are compounds that can stimulate brain cells and possibly fight off dementia[3].

L-Tyrosine – A dietary supplement that is used to improve alertness, attention, and focus[4].

Centrophenoxine – Used in dietary supplements for its potential memory-boosting abilities[5].

What are the Pros of Neural Fusion?

What are the Disadvantages of Neural Fusion?

Q: How Should You Take Neural Fusion?

A: The manufacturer recommends taking one pill per day.

Q: How Much Does Neural Fusion Cost?

A: Yes, the manufacturer states that a refund will be credited for the return of unopened packages within 60 days of the purchase date. Shipping and handling fees are not refundable.

A: A free trial was not found on the Neural Fusion Web site.

Neural Fusion is a Nootropics, which have been found to have numerous positive effects on the brain’s functioning, including short-term benefits like focus, memory, stress resistance, and productivity, and long-term benefits of a healthy brain structure and function during the aging process.3

The manufacturer of this memory supplement also states that Neural Fusion can enhance mood, energy, attention, and sleep, while some longer-term benefits that have been found by using Nootropics have included anti-aging, neuroprotection, and brain regeneration[6].

Memory problems can be a constant struggle as we get older, and Neural Fusion uses the same compounds found in other supplements that increase memory and recall, improve mood and energy, and enhance the brain and memory. It is also a natural, GMO and gluten free choice to improving memory in a safe way while promoting cognitive function and overall mental and brain health. 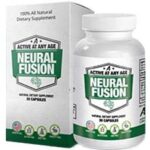