Nature’s Bounty Ginkgo Biloba is a brain-enhancing supplement that improves cognitive processes and mental clarity. Decrease in cognitive decline is an unavoidable process and as such instances of forgetfulness and loss of focus become prevalent.

This can affect day to day activities; activities that were once done faster and efficiently are now performed in a sluggish manner. More serious symptoms of cognitive decline can lead to serious conditions such dementia.

However, to minimize the risk, Ginkgo Biloba promotes efficient functioning of the brain by improving circulation in the brain. It also features antioxidants that can also fight free radicals. 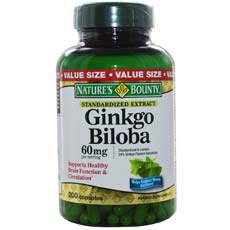 This supplement helps avoid intermittent memory lapses associated with old age. Nourishes the brain cells thus helps improve the overall brain functioning process. It also improves the brain’s memory thus users are in a position to remember more than they would in cases where they were not using the product.

Besides improving brain functioning process, Ginkgo Biloba also has antioxidants that fight free radicals in addition to the fact that they also improve circulation to the body’s limbs.

How to use Nature’s Bounty Ginkgo Biloba

This supplement is primarily meant for adults. A maximum of two capsules per day is recommended. The capsules work at optimum if ingested alongside food and therefore it is preferable to take them with breakfast, lunch or dinner, whichever the consumer prefers.

However, to be other safer side, take one capsule per day unless advised otherwise by a medical practitioner. If taking the pills as they are is not comfortable, the capsules are made in a way that they can be opened and prepared alongside other foods or beverages preferably tea or coffee.

This supplement is perfectly safe to use and does not have any harmful side effects. Conversely, if that is the case, consult a medical professional for help. It is also important not to use the supplement for those that fall into the groups of lactating mothers, expectant women as well, as those under any form of medication.

Nature’s Bounty Ginkgo Biloba is an effective brain nourishing supplement for those who have problems attributable to memory lapses. Since aging is an inevitable process and so is the associated decrease in cognitive performance, this supplement helps keep the brain cells alive, sharp and alert. It therefore maintains a healthy brain thus promotes a graceful aging process. 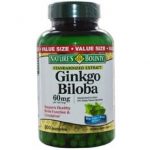