Ginkgold contains flavonoids, which are strong antioxidants that can help enhance brain circulation. The supplement improves cognitive abilities by increasing circulation to the brain and other extremities.

There are many dietary supplements out there that are intended to improve cognitive function – mainly memory. As we get older, our memory becomes compromised but products like the one we will be talking about today are there to help preserve your precious memories and improve overall cognitive functions. Some rely on a number of ingredients but there are some that feature ginkgo biloba primarily because some studies have shown that it may result in improved cognitive function[1].

The product we will be outlining today is one such supplement that relies mostly on the use of gingko biloba to improve memory and other areas of mental activity.

The product is called Ginkgold. Ginkgold is a dietary supplement that falls under the category of memory preservation but the manufacturer claims that it holds benefits beyond just memory improvement and preservation. This is a supplement that comes in pill form and is to be taken orally.

Who is the Manufacturer of Ginkgold?

Their product categories are very diverse as they make supplements for heart health, digestion, memory and more. They state that their products fall in line with Good Manufacturing Practice or GMP. They claim that Ginkgold will help with memory, concentration and blood circulation.

Since the main component of this memory supplement is ginkgo biloba it is important to understand how this herb works and how it affects the brain. Ginkgo contains flavonoids which are essentially potent antioxidants which can improve circulation to the brain[2].

This enhanced circulation to the brain and other extremities may be very useful for improving cognitive functions. Ginkgold is said to also improve concentration as well as other mental activities.

Ginkgold Ingredients – Are They Safe & Effective?

There are only a couple of active ingredients present in the Ginkgold formula and the rest of the listed ingredients are inactive and have to do with the composition of the capsule itself rather than the supplement’s function. Here is a list of ingredients:

Ginkgo Biloba Leaf Extract – Most ginkgo supplements are sourced from the leaves of the ginkgo plant because that is where the beneficial components are found.

Ginkgo Flavone Glycosides – Ginkgo flavone glycosides are what give ginkgo its antioxidant properties and they usually make up about 24% of a ginkgo supplement.

Terpene Lactones – This is the other half of what gives ginkgo biloba its brain boosting effects as it has a direct impact on the circulation of blood to the brain.

Cellulose – This ingredient is used in many capsules in order to maintain consistency of the pill and prevent moisture damage.

What are the Pros of Ginkgold?

What are the Cons of Ginkgold?

Q: How Should you Take Ginkgold?

A: The suggested usage for Ginkgold is to take one capsule with water, preferably at a mealtime. You may be able to up the dosage to two capsules a day but you should probably talk to a doctor before doing that.

Q: How Much Does Ginkgold Cost?

A: It should be noted that Ginkgold comes in different sizes: 50, 75, and 150-tablet containers. This product cannot be bought through the manufacturer directly but is sold in many retail stores where the price is likely to vary.

A: As there is no standardized return policy for Ginkgold because it cannot be bought through the manufacturer directly, consumers will need to check the policy of the individual retailer.

A: There is currently no free trial offer being made by Nature’s Way Products LLC for Ginkgold. You may be able to request one.

In summary, Ginkgold is a dietary supplement meant for improved cognitive ability and memory enhancement. Ginkgold relies mostly on the efficacy of gingko biloba as a nootropic substance that can improve cognitive function. This product may be able to improve blood circulation to your brain and other extremities as well as provide antioxidant defense. Ginkgold is also a supplement that is suitable for vegetarians.

Keep in mind that some studies suggest that ginkgo biloba has no effect on memory and cannot slow the decline of memory as a person ages. Ginkgo has also been known to cause dizziness, constipation and upset stomach. The formula for Ginkgold is rather limited so that may hamper how much it can actually do for the user. At the end of the day we recommend comparing Ginkgold with other memory supplements before opting to make a purchase. 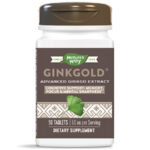