What is Irwin Naturals Ginkgo-Smart?

Ginkgo Smart is a product that is advertised as a natural supplement that helps improve memory and concentration.

This product is manufactured by a United States company called Irwin Naturals. This is a company that is well known in the production of natural supplements from herbs.

Ginkgo Smart is, therefore, a memory pill that promises to bring positive results to those people struggling to remember things.

You can purchase Ginkgo Smart from the manufacturer’s website or from many online retail stores. One bottle of 90 gel caps is enough for 45 days of treatment when two gel caps are taken daily.

How Does Irwin Naturals Ginkgo-Smart Work?

Ginkgo Smart contains a blend of several amino acids, antioxidants, herbs and other substances that work in the body to enhance cognitive functions. The key ingredient is Ginkgo Biloba extract that has been used over time because of its beneficial effects.

This herbal extract has demonstrated to reduce the effects brought by Alzheimer’s disease such as depression, absent-minded, dizziness, tiredness, and many other effects.

The antioxidant protection properties of this product are brought by Alpha Lipoic Acid. This substance has the ability to neutralize the harmful effects brought by free radicals.

What are the Advantages of Irwin Naturals Ginkgo-Smart?

What are the Disadvantages of Irwin Naturals Ginkgo-Smart?

How Should You Take Ginkgo-Smart?

This product is taken as a dietary supplement. The recommended daily dosage is 2 capsules per day taken together with food or in between the meals.

How Much Does Ginkgo-Smart Cost?

The fact that this product contains Ginkgo Biloba alone makes us affirm its effectiveness. This substance has shown to increase blood flow to the brain and to reduce the effects brought by Alzheimer’s disease.

Another substance contained in this product that is said to be effective is Vinpocetine. This substance has shown to work in the brain to improve cognitive functions of the brain, as well as memory. Overall, this product contains many low performing ingredients compared to other products in the market.

Ginkgo Smart advertised as a supplement that helps improve memory and concentration. It is a product that is manufactured from a blend of researched herbal extracts and naturally-occurring substances that help improve memory and other cognitive functions.

This product contains many low performing ingredients compared to other products in the market. So if you are looking for a high-quality brain enhancement product, we strongly advise you to consider other products.

Another thing to note is safety. It is reported that this product contain a certain chemical which may cause birth defects and other reproductive harms. Always research widely and consult with your healthcare professional before using any best nootropic supplements. 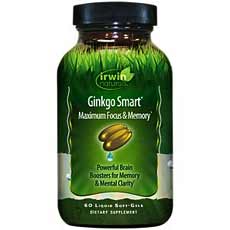 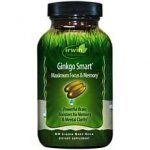