Cover Three Reviews – Is This Brain Enhancement Supplement Worth Trying?

Cover Three is a nootropic brain supplement that comes in drink form provides the ability to defend the brain from what happens when it experiences light impact trauma, enhance focus and memory.

What is Cover Three?

As far as nootropics goes, this is an interesting one. Cover Three is indeed a product that falls under the category of nootropic products but its intended use is a bit more specialized than most of the nootropic substances that you are likely to find on the internet or at the store.

It seems to have been formulated for the specific purpose of protecting your brain against impact trauma. It may be able to help your cognitive functions as well.

The basic facts of Cover Three are that it is a brain supplement that comes in drink form and in it, there are components that the manufacturer refers to as neuroprotectors.

These components are what give the drink its ability to defend the brain from what happens when it experiences light impact trauma.

It comes in a portable pouch that you can drink any time although they recommend taking before or after you’ve bumped your head.

Who is the Manufacturer of Cover Three?

Cover Three is manufactured by itself.

It was reportedly developed by two brothers who had a long history with brain trauma. One of them is a doctor and he is the one who founded Cover Three back in 2017.

He apparently has formulated Cover Three to be specifically beneficial for those who are prone to bumping their heads.

In this sense, Cover Three seems to be marketed towards athletes. Even the name “Cover Three” is a football reference.

How Does Cover Three Work?

Cover Three works as a protection for your brain and it does have some practical use as a traditional kind of nootropic.

For example, we are told that Cover Three works by providing an antioxidant defense to the brain which can have many different short and long-term benefits for the function of the brain[1].

We are also told that Cover Three works to deliver a spike of focus and concentration when the user drinks it.

The formula that is used to make Cover Three is made up of mostly naturally occurring things.

In this sense, it may be safe for most users. Still, it is always a good idea to check with a doctor before starting any nootropic supplement regimen.

Curcumin – Curcumin has the uncanny ability to cross the brain-blood barrier and clear away plaque buildups which are thought to be associated with Alzheimer’s disease.

Transresveratrol – This is a specific kind of resveratrol and is said to be better because it provides more antioxidants to the brain[2].

Alpha GPC – Alpha GPC may work at enhance cognitive function such as memory and memory recall[4].

Uridine – Uridine helps carbohydrate metabolism and has anti-inflammatory effects on the brain.

Vitamin C – Vitamin C plays a key role in many bodily functions like regenerating cells and connective tissues and boosting the immune system.

What are the Pros of Cover Three?

What are the Cons of Cover Three?

Q: How Should you Take Cover Three?

A: Cover Three comes in a travel-sized pouch that can be drunk from pretty much any time. If you have bumped your head you can take it every day until the symptoms go away.

Q: How Much Does Cover Three Cost?

A: We could not find any information on the return policy for Cover Three but there is contact information where you may be able to get some answers.

A: There is currently no free trial being offered for Cover Three. You may be able to contact the company and formally request one though.

Cover Three is definitely a specialized brain supplement which has been specially formulated to help athletes and anyone who bumps their head.

It may have a pleasing taste and it may support the brain with antioxidants. It may also improve certain cognitive functions like memory recall.

Cover Three contains vitamin C which may not have any specific benefits for the brain.

It also contains curcumin which can have contraindications for people with gallstones and other conditions.

You should also not take Cover Three if you are allergic to fish as there is an omega 3 content in the formula.

Overall, Cover Three does deserve your consideration but so do other nootropic supplements of this nature so check them out. 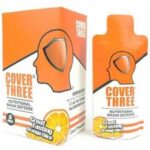