CogniForce Reviews – Is This Brain Supplement Safe To Use?

Medically reviewed by Lauren Ann, MS
0 Reviews
1 out of 5

CogniForce is a performance enhancement pill that promises many cognitive benefits, while also offering cognitive maintenance.

According to the manufacturer, this product uses a standardized root extract that is derived from an ancient herb ashwagandha called KSM-66, and other special ingredients to help maintain a natural balance in the levels of the stress-related hormone. It may also improve brain function[1].

Additionally, the formulation supposedly increases blood flow to target regions of the brain, which consequently may improve cognitive response and sharpen memory. It may also support healthy metabolism of homocysteine, thanks to its complex vitamins.

Who is the Manufacturer of CogniForce?

The company behind CogniForce is called Primal Lab. They have a well-established official website with lots of information and products related to general health. The company mentions that they follow stringent guidelines while manufacturing all their supplements to ensure purity, potency, and safety.

They also mention that all the ingredients used in their products are human tested (not just animal tested) and shown to deliver the touted benefits naturally, with minimal side effects.

The way CogniForce claims to work is it supplies the necessary ingredients that may be essential in the primal functioning of the brain. When the brain is well fed with these particular nutrients, the result may be heightened mental awareness. It may also fasten a person’s mental processing speed and improve focus.

Some of its ingredients such as Acetyl L-Carnitine have been shown to help reduce forgetfulness in old people citing the fact that it may increase the deep mass of the memory neurons.

L-theanine, on the other hand, has been suggested to support brain wave activity, which in consequence may promote alertness, a clear mind, and a relaxed feeling. When that feel-good mood is induced in the brain, a person may be able to focus with less struggle[2].

CogniForce Ingredients – Are they Safe and Effective?

This focused support and cognitive health supplement uses lab-tested ingredients that are said to work together to give it its potency.

CogniForce may be considered safe and that the results a quite notable after a certain period of use.

The list of ingredients in this formula is as follows:

What are the Advantages of CogniForce?

What are the Disadvantages of CogniForce?

Q: How Should You Take CogniForce?

A: Users are to take 2 capsules of CogniForce per day. The producer does not specify the best time to consume the pills, but most similar cognitive formulas recommend taking in the morning.

Q: What are the Side Effects of CogniForce?

A: CogniForce tends to develop the following side effects if the medicine is taken in excess or in a wrong manner:

Q: How Much Does CogniForce Cost?

A: This product features a 60-day return policy for a full refund, but minus the shipping fees. However, users have to verify their claim by sending the item back unopened and undamaged.

A: The official website for CogniForce does not indicate that they offer a free trial for this product. However, you are free to inquire about the same by contacting the manufacturer.

Q: I need a phone number to Order CogniForce, How to Contact them?

A: You may reach CogniForce customer support via calling at: 877-300-7849 or emailing their customer support team at: [email protected]. Support hours are; Monday thru Sunday from 8 AM to 5 PM Central time.

CogniForce claims its space in the brain enhancement market for using ingredients that have been shown to support enhanced focus and increased memory recall. In precise, each constituent’s claims are research-backed; something that makes you want to give this supplement a go.

In precise, its main ingredient Acetyl L-Carnitine is mentioned in an Italian study that it may have a wide range of cognitive health benefits, one being supporting healthy brain neurons for better memory.

However, the area where the producer does not seem to come out clear is whether the product stays effective after long-term use.

The other thing that should appear like benefits but it is a drawback for this product is the fact it is said to help manage the decline of brain volume in old people[3], but there’s a limited study to confirm this actually happens.

High rated cognitive support supplements in the market try to explain everything the user might want to know. 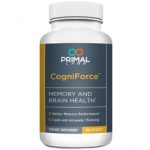