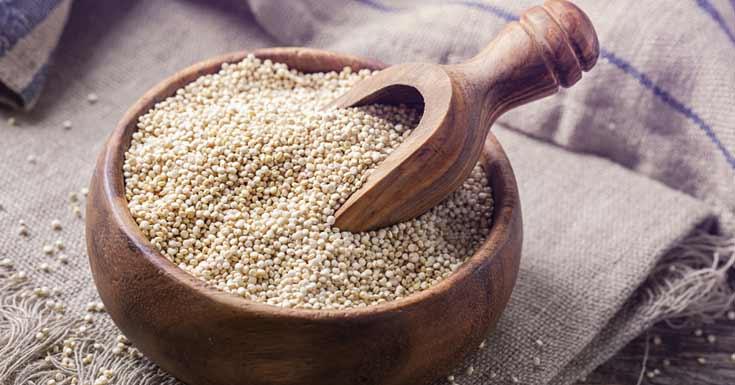 When talking about nutritious and healthy superfoods, one cannot start a conversation without mentioning quinoa. Known since the time of the Incas, this grain represents the basis of every nutritious meal.

As a superfood, although quinoa is not as popular and easy to find as barley, buckwheat or corn, it still packs quite a lot of nutritious and healthy compounds, making it one of the most powerful disease-preventing grain.

Everybody knows that quinoa is recommended for weight loss diets or for preventing heart disease. Well, as it happens, quinoa isn’t called a superfood for nothing. You may not know this, but quinoa is so versatile that it can even be used to prepare homemade remedies for pets.

Celiac is a very rare form of gluten allergy, and it is also considered an autoimmune condition. This is where quinoa comes in. The wonder-grain is, by default, gluten-free, meaning that patients suffering from gluten intolerance can swap their meals, most of them falsely labeled as gluten-free with dishes made with quinoa.

Quinoa’s popularity has increased after researchers discovered that the grain can be used as a perfect substitute for wholegrains.

Another hidden benefit of consuming quinoa is that the grain can actually lower your blood sugar. On top of that quinoa has the lowers glycemic index of all grains (around 50).

If you’re suffering from type 2 diabetes, you should definitely go and talk to your doctor about eating quinoa-based meals. Plan your meals ahead, and in just a few months you’ll begin to feel a lot better. Also, your blood sugar levels won’t be that chaotic.

Quinoa can also be used as an antiseptic. During the process of refining quinoa, the saponins, which are chemical compounds found mainly in plants, are removed and reused to make other products like soap and detergent.

The saponins extracted during the purification process can also be used to manufacture natural antiseptics. This not only proves that quinoa is superfood but a versatile plant/grain as well.

With the number of cancer cases spiking, especially breast, and colorectal cancer, the need to find the perfect superfood is must. It would seem that quinoa is the wonder-food we were looking for all this time.

Why is quinoa associated with cancer prevention and treatment? As a grain, quinoa is rich in flavonoids, especially kaempferol, and quercetin. The two compounds found in abundance inside quinoa seed are active antioxidants.

Recent lab trials have determined that quercetin, a flavonoid, has shown marvelous results in the fight against late-stage breast cancer. Moreover, the wonder-seed can also be used to prevent the apparition of this condition, and is especially good for women going through menopause.

You may not know this, but for some time now, quinoa has been used to cure all kinds of ailments, including migraines. A migraine can be understood as an imbalance regarding brain chemistry.

Quinoa can help you get rid of migraines because the grain has a high concentration of vitamin B2, and magnesium, just the things you need to wish away that pesky pain. Magnesium, along with vitamin B2, is essential to the blood vessel expansion process, meaning that your brain’s blood vessels will widen to allow the blood to move freely to critical areas in your brain.

If studies don’t persuade you into eating quinoa, maybe history will. From a historical standpoint, it would seem that quinoa, along with wheat, is the oldest type of grain cultivated by humanity.

Quinoa was first cultivated 3,000 to 4,000 years ago by the tribes living in the vicinity of the Andes. The plant was so important to the Andean tribes that it became a central figure in their religion. After the Incan Empire rose to power, the plant becomes nothing less than a small deity.

In fact, the Emperor of the Incan Empire would sow the first quinoa seeds using golden implements. Moreover, quinoa was so important to the Incas, that it received the name of mother of all seeds”.

Apart from religious ceremonies, quinoa was very popular among soldiers. Incan troops would consume a fair amount of quinoa seeds before going into battle. Being high in fibers and calories, quinoa offered the soldiers a boost in stamina and speed.

We can clearly state that quinoa has truly earned its reputation as a superfood, having many hidden qualities that will benefit your health.