By now everyone knows that too much sun can have harmful effects on the skin. Painful sunburn, accelerated aging and wrinkles, and even skin cancer1.

And while no amount of sun exposure can be considered 100% safe, getting some sun may improve our mood as well as increase our vitamin D levels.

The major source of these harmful effects is the ultraviolet (UV) light emitted by the sun2. Sun Protection from these damaging effects is possible with the use of hats, sunglasses, clothing, and sunscreen.

Of these choices, sunscreen is among the most popular and most widely used. There has recently been a rise in the controversy regarding the safety of sunscreen products and the possible toxicity they may cause with human use.

Earlier studies have advocated the use of less “environmentally toxic” products after identifying the possible link between sunscreens used by swimmers and catastrophic bleaching effects on coral reefs3.

Can Sunscreen Be Toxic?

Recent concerns raised about the ingredients used for sunscreens include the fact that they may release of toxic free radicals when exposed to sunlight and increase the risk of skin cancer.

Products that can be released from sunscreens through photo-degradation resulting in phototoxicity/irritation or photoallergic reactions4.

The possible toxicity of sunscreen products continues to be a subject of ongoing debate and further research.

The environment working group (EWG) released their 2015 guide to sunscreens and in a May 2015 press release commented that 80 percent of U.S. sun protection products they evaluated (1,700 total) contained potentially harmful ingredients and/or provided insufficient protection from the sun’s most harmful rays.

The sunscreen products they evaluated were SPF rated and included lip balm, sunscreen and moisturizers5. 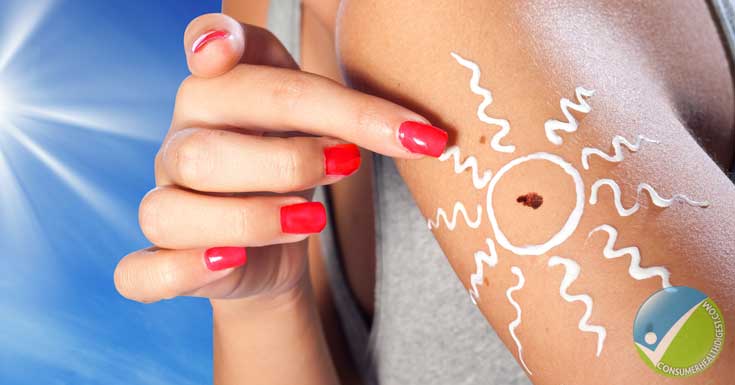 Among the chemicals identified by EWG was oxybenzone that has been an ingredient in sunscreens for decades.

This chemical first came under fire in the early 2000s for possible hormonal effects attributed to this “synthetic estrogen.”

However, later studies found that this ingredient does not accumulate to any appreciable degree in the human body and, therefore, has continued to be an FDA approved ingredient for sunscreen in the U.S.

Vitamin A derivatives were also included in the EWG report which has provoked further debate.

The vitamin A derivative, retinyl palmitate, can be added to sunscreen products as an inactive ingredient.

Prescription products that are vitamin A based, like retinoic acid used for acne, are known to increase one’s sensitivity to the sun; however, this sun sensitizing effect has not been associated with the same claim of the potentially harmful effects of sunscreen products.

The FDA has communicated publically that the studies used as a basis to provide caution for use of these vitamin A “additives” in sunscreens were very limited and could be misleading.

The FDA noted that further study and reports would be forthcoming.

Although this form of titanium is applied in tiny nanoscale particles (a size that allows application to be invisible), the dry powder has been associated with toxicity if inhaled.

The International Agency for Research on Cancer (IARC) classifies the dry powder form of titanium dioxide as possibly carcinogenic to humans, however the jury is still out on the potential toxicity of other versions of this chemical.

Research evaluating the use of sunscreens that block and/or absorb UV radiation has demonstrated reduced damage and risk of skin cancer.

And though titanium dioxide is an effective blocker of broad-spectrum UV radiation, it is not the only option. However, many of these alternatives have their possible negative health risks as well.

What else can we do until we know more about these potential risks? 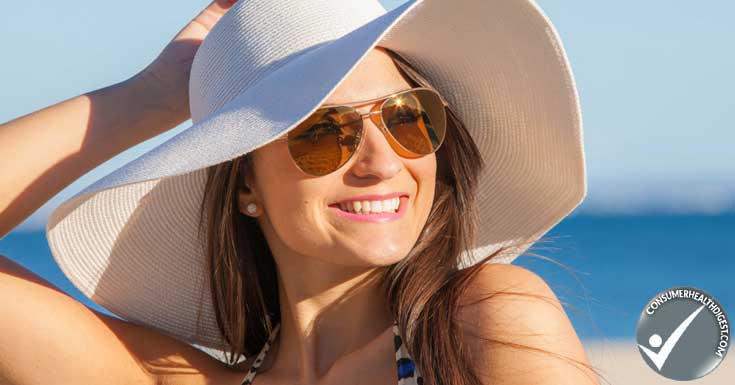 The American Cancer Society along with other agencies recommends use of broad-spectrum UV radiation blockers with SPF of 30 or greater whenever you are going to be in the sun and that you periodically reapply sunscreen to ensure continuous protection6. In addition: 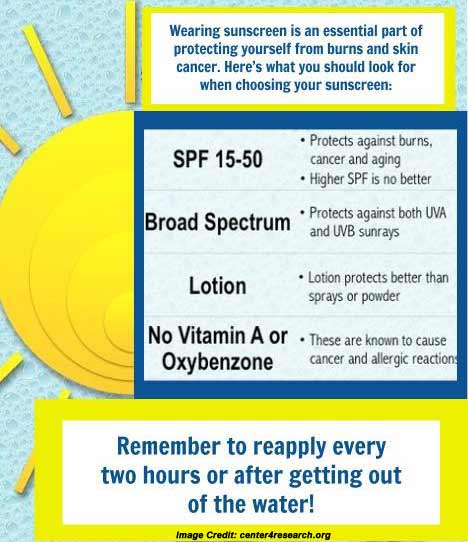 Currently there are 17 sunscreen ingredients approved by the U.S. FDA for use over the counter.

A review of the literature was conducted to determine what, if any, sunscreens may be toxic.

Nash et al4. assessed both acute and chronic effects that can result from sunscreen use in humans.

The major question posed by this research team was whether or not a photo-unstable sunscreen carries a higher risk of harm. Much of the risk involved with more photo-unstable products (like avobenzone) is skin irritation/allergic response caused by the by-products of photo-degradation, and the possible increase in UV exposure due to loss of UV protection, increasing the risk of sunburn and skin cancers.

The phototoxic effect of avobenzone has been detected by laboratory assay, but testing in humans did not provide the same results possibly due to a concentration that was too low to induce the allergic response.

Studies conducted on hairless mice demonstrated that avobenzone and its degradation products were protective against UV-induced skin tumor formation.

A prospective, population-based controlled clinical trial found that when 2% avobenzone was used in combination with 8% octyl methoxycinnamate (OMC), it reduced the number nonmelanoma and melanoma skin cancers, as well as evidence of photoaging. 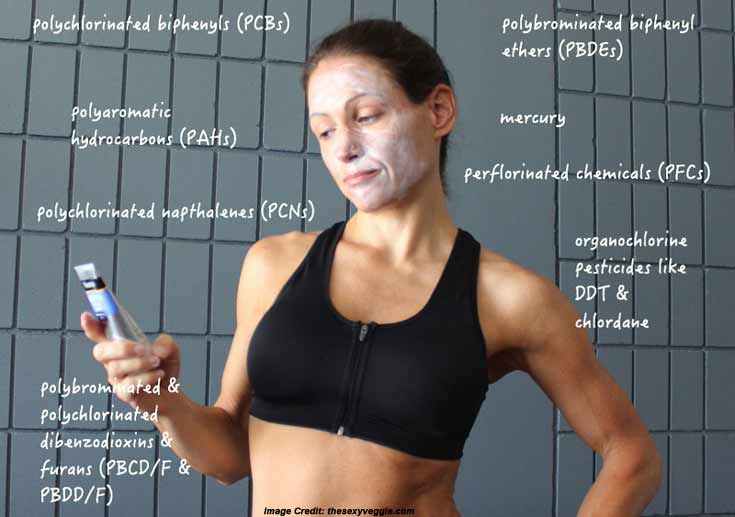 Titanium dioxide and zinc oxide are known to be stable when exposed to UV light, however they may produce free radicals when they are exposed to it.

These free radicals may degrade other ingredients that are present in the sunscreen product, but these reactions are typically prevented by coating these products with cosmetic ingredients, such as silica and stearic acid.

There has been no evidence presented from either clinical case reports or other literature about any adverse health effects from hypothetical photo-degradation by these metal oxides.

There has been concern expressed about the possibility of these titanium nanoparticles accumulating in the hair follicles and sweat glands. Titanium dioxide is coated with organic or inorganic compounds to help prevent possible adverse effects.

A study conducted in 2009 showed an absence of titanium dioxide particles in the deeper layers of skin even when applied under an occlusion. Both titanium dioxide and zinc oxide in nanoparticle formulas are evaluated in more recent studies that show that there is no percutaneous penetration in human adult skin, and cause no damage to mammalian cells.

Formulations have also started encapsulating these nanoparticles with magnesium to help prevent the formation of their free radicals.

In general the team found that the older substances that were used in sunscreen, such as Para-aminobenzoic acid (PABA), were responsible for many photoallergic reactions.

When tested in Europe, both Benzophenone-3 and octyl methoxycinnamate (at concentrations of 10%) were found up to four-days later in the urine and plasma, demonstrating the ability of these chemicals to be absorbed into the circulatory system.

The approved formulations by the FDA for these products cannot exceed 6% and 7.5% respectively.

Jalalat’s research team2 reviewed oxybenzone and the recent scrutiny regarding its possible estrogenic and antiandrogenic effects.

This claim has been refuted through a study which demonstrated that approximately 300 years of daily sunscreen application is needed to reach the levels of oxybenzone that was used in animal studies to achieve these negative hormonal effects.

You May Also Want To Read – How To Remove Skin Tags Around Eyes?

Also, most of the adverse effects that have been studied regarding oxybenzone have involved using the oral route rather than topical application.

Additionally, oxybenzone has shown to have a significantly weaker affinity for binding to estrogen receptors when compared to both estrogen and estradiol.

There are many sunscreen products that are available and effective. Consumers should evaluate the information available and select a product that works best and that they feel the most comfortable using.

Selecting a product that contains an FDA approved ingredient and following updates regarding the safety as released by reputable sources that have data to support the information provided is a recommended strategy.

“Have you ever tried any Sunscreen which ended up in a Nightmare” Share your experience in comments!!

Dr. Demler serves as Psychiatric Pharmacy Residency Director for the New York State Office of Mental Health and is the Director of Phar Read Full Bio