Coconut Oil: Does It Prevent You from Skin Aging and Wrinkles?

For centuries, coconut growing regions in the Asia Pacific have found plenty of uses for coconuts, from its leaves and fruits down to its trunk and roots. Coconuts are commonly used for food including its oil, which is likewise highly regarded for its medicinal and healing properties. Ingestion or topical application of coconut oil, often derived from the first milk of ground coconut meat (which is how virgin coconut oil is made), is commonly prescribed for almost every known infection and disease, typically involving hair, skin, digestion, respiration, blood and circulation, and common aches and pains on muscles, bones, and joints.

https://www.consumerhealthdigest.com/anti-aging/anti-aging-ingredients.html
After misleading reports were published about coconut oils bearing unhealthy saturated fats, people tended to steer clear of coconut oil for a while. Following several studies that prove otherwise and which, on the contrary, hailed coconut oil as the healthiest super oil, more and more modern uses for coconut oil have been founded, including for cosmetic uses specifically to protect skin from aging and reverse unsightly effects of damaged skin.

Coconut oil is composed of medium-chain triglycerides (MCT), fatty acids that often come with saturated fat that have been naturally derived, as in coconut oils. MCTs provide more health benefits compared to their long-chain triglyceride (LCT) counterparts often found in commercially, hydrogenated vegetable and seed oils. MCTs are composed of simple chemical structures that help them easily penetrate the skin, quickly absorbed into the bloodstream, effortlessly tolerated by the liver, and readily converted into energy to power body functions and activities. In fact, athletes use MCTs as energy supplements. MCTs, owing to their high permeability, also easily and deeply penetrates skin cells, which keeps skin well-moisturized, young looking, and supple to the touch.
In addition, coconut oil also resembles sebum, which the skin naturally produces to shield it from harm and damage. Coconut oil, thus, provides an additional layer of protection to skin when used topically.
Unprocessed, all-organic virgin coconut oil is famed for its anti-microbial and anti-fungal properties plus it contains high levels of antioxidants which all combine to protect skin from infection, correct skin imperfections, hydrate dry and scaly skin, and even out skin tone.

How Does It Work for Anti-aging?

Coconut oil has anti-inflammatory properties that help shield skin from damaging factors including sun damage, skin diseases and infections, acne, and environmental factors like cigarette smoke and pollution which contribute to premature aging.
Regular topical application of coconut oil benefits the skin in many ways, as follows:

You can take a glance at Active Brightening Face Serum review on our site, it is anti-aging serum which may also support to reduce premature aging & gives radiant skin.

What’s the Best Type of Coconut Oil for Skin Use? 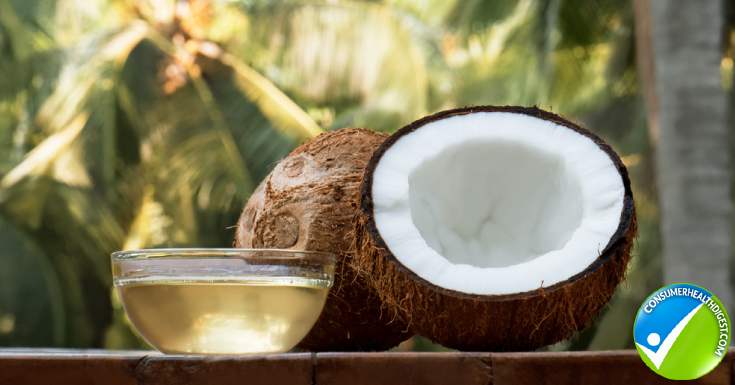 If you want to benefit fully from the goodness coconut oil can do for your skin, reach for virgin coconut oil in its most unprocessed state. If you have access to fresh coconuts, its best to extract the coconut oil yourself.

Are There Any Side Effects?

There are no known side effects concerning the topical application of coconut oil. Too much ingested coconut oil, however, can result to diarrhea and upset stomach. Heavily processed coconut oils may not be as easily digested as its natural, minimally processed counterparts, and therefore can potentially harm your liver.

What are The Customer Opinions?

Populations in coconut growing regions have used coconut oil for centuries and attest to its cosmetic as well as its medicinal prowess. Coconut oil has been found to be great for improving hair texture, and skin moisture and complexion. Some users have observed minor irritations from its use, which remains possible depending on skin type and coconut oil extraction and storage procedures used.
Advocates have found coconut oil to be better moisturizers than most commercially available alcohol-based and water-based skin creams and lotions.

ALSO READ – Anti-Ageing Diet and Can Really These 5 Foods Makes You Age Faster?

Truly, nature abounds with everything that we need from food and yes, down to our beauty essentials, and coconut oil could be one of nature’s wonders and might well be the fountain of youth humans have been vainly searching for ages! Keep an open mind for traditional and natural beauty enhancers. After all, after years of artificially prepared beauty bottles, your skin might just be craving for the delicious skin-nutrition only naturally-sourced beauty secrets can give. If you think it’s time for you to go natural, coconut oil may be a great way to start your new beauty regimen.
There are many anti-aging creams available on the market which also contains coconut oil, hence endeavoring anti-aging cream such as Flawless Forever might be a wise decision.

Margaux Diaz is an inspirational writer who strongly believes in the power of self-motivation. She believes that every woman and man, n Read Full Bio